You are invited to join our LCGOP Breakfast Club on Saturday, July 29th! 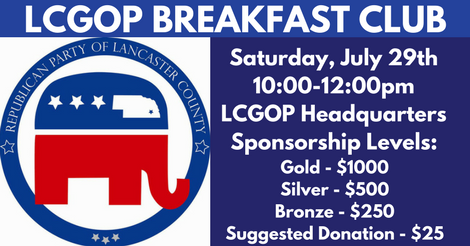 What Party Does Bob Krist Belong To?

The Facts About Leirion Baird on Property Taxes!

HERE ARE THE FACTS:

In 2015 Leirion Gaylor Baird rejected a call by the majority on the city council to lower the property tax levy. She instead stated that Lincoln residents would be willing to "pass on their pizza" to keep property taxes high in Lincoln.

We are committed to electing Republicans across the board in 2017.  WILL YOU STAND WITH US?  Lincoln is a great place to live and work.  We need your help to make Lincoln even better. Will you vote for the candidates at the link below on April 4th and May 2nd? Please help to GROW LINCOLN by clicking on the graphic below and giving us your endorsement of the following candidates.

We are excited to invite everyone to our 2017 Lincoln-Reagan Day Event on Wednesday, February 22nd.   Congressman Don Bacon will be our featured guest and keynote speaker here in Lincoln.